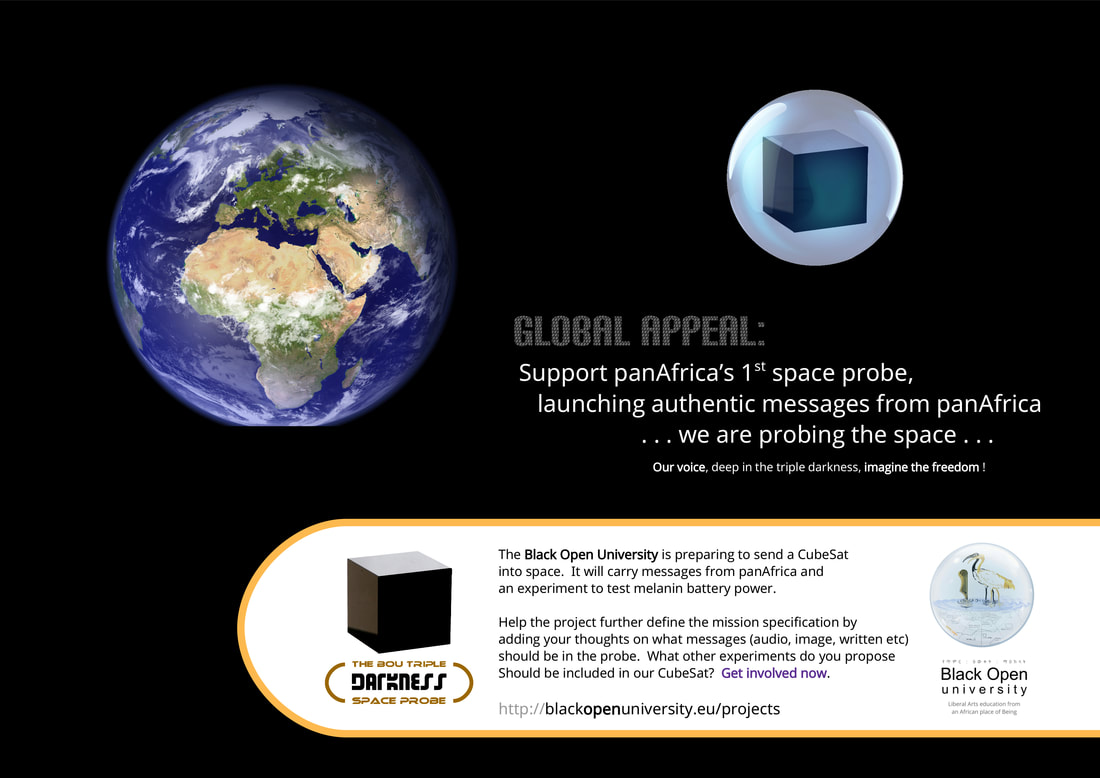 The ​Black Open University is preparing to send a CubeSat (mini satellite) into space. It will carry messages from Pan-Africa and we will experiment with power systems using synthetic melanin powered batteries.  We want YOU, your family and the whole community of interest to get involved and add to the project brief and plan.

This is a wonderful science learning engagement project.

This space probe could carry your ideas far beyond the boundaries of Earth. Whether you're an adult or child your contribution is welcome. Help the project further define the mission specification by adding your thoughts on what messages (audio, image, written etc) should be in the probe. What other experiments do you propose should be included in our CubeSat? Get involved now.
​

What is a CubeSat?

​​​.The basic structure of the CubeSat was designed in the late 1990s by Professors Jordi Puig-Suari (California Polytechnic State University) and Bob Twiggs (Stanford University). The design structure of a CubeSat can vary but on the whole the standard size is 10cm3 with a mass of 1.33kg The CubeSat was a product of the era of the miniaturisation of technology and electronics.
​

The CubeSat travels on a low Earth orbit (LEO) which lays in a range between 150-600km high. The altitude control systems aim to alter the orientation of the CubeSat in various positions. Altitude controls can be achieved with the aid of technologies such as sun sensors, thrusters and GPS ( global positioning systems). These are used in the context of the earth, the moon, solar and other factors that affect the environment in space. On the other hand, propulsion systems aim to provide a driving force to move the CubeSat. Propulsion for CubeSats have been achieved by various technologies such as cold gas, electrical and chemical propulsion. Nozzle propulsion has been the most favoured, they have been used to increase the length of orbit and slow down orbital decay. Regarding power systems we are keen to break new ground by testing the new energy capacities of  synthetic melanin, which has recently been demonstrated to have very special pushing capacities.
​
​

Most recently, CubeSats have been used to aid NASA’s laser and satellite communications. We are currently considering using radio communications such as VHF (very high frequency) and UHF (ultra high frequency). Find out more about these and help us develop the best communication system for the Triple Darkness Space Probe. Typically, LEO CubeSats can operate on UHF antennas for communication purposes. For Cubesats venturing further into the Solar system larger antennas are required. CubeSats are usually made up of multiple mini computers that carry out essential control tasks.

The primary computer is needed for tasks like processing images, analysing and compressing data. In addition, these computers carry out other tasks such as, altitude control (orientation), orbit manoeuvres and scheduling. CubeSat computers also use error correcting code memory (ECCM) to combat radiation. We will be exploring how this operates with the proposed melanin battery systems. CubeSat's have many roles in exploration, technological, scientific and educational contexts. We intend to harness and engage in all of these contexts and more. Help our communities gain the most from this project. Get involved now.
​

The general costing for buying and launching CubeSats vary, these are some of the options you may wish to explore. Pumpkin Inc CubeSats are on sell for £6,000, they are a well known provider of the standard CubeSat model. On the whole, CubeSat launches roughly cost  £30,000 however, as technology advances these cost are gradually coming down. On the other hand, there are cheaper alternatives. The development and launch of CubeSats under companies such as the Inter Orbital System can be as little as £6,000. On average CubeSats are much cheaper than a standard satellite, this is due to several factors such as, less need for fuel because of the CubeSat's lightness. The great economic advantage is that the CubeSat is able to share rocket launches with bigger satellites (also known as payloads).

There will be notable research and development (R&D) budgeting required. R&D is the heart of the learning experience that this project will bring about. We are open to working with project patrons, investors and philanthropists who may see how their unique visionary values can be realised through their support of this wonderful venture.  Think about the global inspiration that this project will advance when done in the best possible way!

​The history of messages to outer space 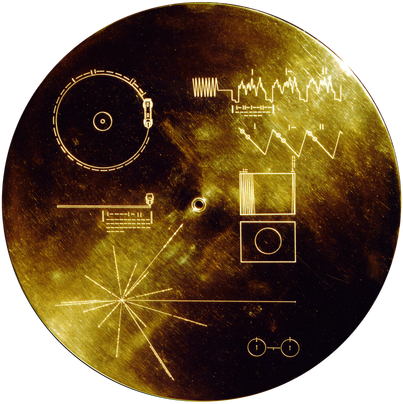 The first ever CubeSats were launched in June 2003 from Plesetsk launch site in Russia.  The Triple Darkness Space Probe is going to add to a long global history of sending messages into space. A major inspiration for the message component of our probe has come from the Voyager Space probes. Voyager 1 was a space probe launched by NASA on September 5, 1977. Part of the Voyager program was to study the outer Solar System. Voyager 1 launched 16 days before its twin, Voyager 2. Having operated for 40 years, 1 month and 1 day as of October 6, 2017, the spacecraft still communicates with the Deep Space Network to receive routine commands and return data. At a distance of 140 AU (2.09×1010 km) from the Sun as of September 22, 2017, it is the farthest spacecraft from Earth as well as the farthest man-made object.

​Each voyager probe carries a gold-plated audio-visual disc in the event that the spacecraft is ever found by intelligent life forms from other planetary systems. The disc carries photos of the Earth and its life forms, a range of scientific information, spoken greetings from people such as the Secretary-General of the United Nations and the President of the United States .  Other sounds include  "Sounds of Earth," such as whale sounds , a baby crying, waves breaking on a shore  and a collection of music, including works by Mozart, Blind Willie Johnson, Chuck Berry, and Valya Balkanska. Other Eastern and Western classics are included, as well as various performances of indigenous music from around the world. The record also contains greetings in 55 different languages.

Having reviewed the Voyager messages the Black Open University have found them both inspiring and yet profoundly lacking.

Our project has identified a need for messages to be sent into the space that give the true voices of Africa the dignity and  respect they deserve. Do you agree or disagree? We welcome a broader discussion about this point. The Triple Darkness Space Probe project is open to your thoughts regarding what message should be on our space probe. Our communications should  represent the ancient traditional voices and images of Africa, voices that connect to the original peoples of the Earth.

Although this first mission may not go beyond LEO (though it might) it should be viewed as a proof of concept, a probe that marks a new kind of declaration of agency (self-determination).

We are keenly exploring a global network of prospective partners.  We are especially keen to work with other universities, schools and learning centres as well as several secretariats of the African Union (AU) and Caribbean Union.  We are also open, even at this early stage, to working with project patrons, investors and philanthropists.  Are you a visionary philanthropist?

Regarding space related agencies you will find it interesting to note that NASA centres give U.S. agencies the ability to launch CubeSats through their own selection process. We may explore this option as it will give us a clear framework for our project plan development. Over the last couple of years NASA has facilitated more than 46 missions.

Space X and the Japan Manned Space System Cooperation (JAMSS) also provide commercial launches for CubeSats. India's ISRO (Indian Space Research Organisation) have carried out commercial foreign CubeSat launches since 2009. Also, the Kennedy Space Centre have created new services dedicated to developing rockets for launching small satellites. There are many other organisations that are entering the “business” of space flight and service support, this growing market only serves to reduce the cost for organisations like ours making it even more viable to achieve wonderful successes.

​At this early stage of the project development we are now determining who we should work with regarding consultancy and partnerships.  Do you have ideas or proposals of who we should consider working with?  Let us (and them) know, get involved now.

How can you get involved?

The first stage of the project development is to outline the basic project brief.  This will enable us to prepare a more detailed project plan and more accurately calculate the budget requirements.  The project plan will also help us consolidate our project partnerships and consultancy requirements.

Please join our Space Probe Discussion Forum, we have established a separate space for these initial discussion so that the quality of reasoning and determination can be well moderated.  Visit the forum today, register as a member and start sharing your comments, ideas and questions.